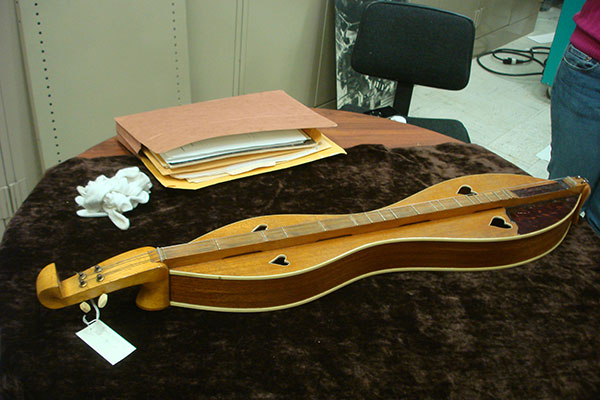 In about 2013 I was teaching my “Build a Ukulele in Four Days” course at the Crucible in Oakland, and one of my students was a wonderful artist named Wayne Jiang.  On the second or third day of the class, we were all eating lunch in the workshop and chatting, and Wayne happened to mention his love of mountain dulcimers and that he and his partner, Patricia Delich, were working on a film to be titled, “The Heart of the Dulcimer” centered around the surge in popularity of the instrument in the 1960s and ‘70s, much of which was inspired by Richard Farina’s use of the instrument in some of the earliest folk-rock.

When Richard’s name came up, I casually said, “Oh, I put an extra fret in Richard’s dulcimer in 1965.”  Wayne was astounded.  “You put in the 6 1/2th fret?”  “Yes,” I said.  “Was that a big deal?”  Well, it turns out that it was a huge deal in the dulcimer community.  It made it OK for the dulcimer to not be a strictly diatonic instrument, and it has now become the norm for the fretting pattern for the instrument.  Here’s the story of “The Night of the Living 6 1/2th Fret”

I’d been touring playing guitar with Ian and Sylvia in 1965, living in Cambridge when not on the road.  We folkies all pretty much knew one another in Cambridge at that time…the Jim Kweskin Jug Band with Geoff and Maria Muldaur and Bill Keith, the Charles River Valley Boys, Taj Mahal, Tom Rush, the guys who would go on to be the Youngbloods…Jesse Colin Young, Jerry Corbitt, Lowell “Banana” Levinger, and Joe Bauer, Jim Rooney, and of course, Richard and Mimi Farina who lived about four blocks from my place on Kinnaird St.   One early evening when I happened not to be on the road, I got a call from Mimi: “We’re doing Robert J. Lurtsema’s radio show tonight on WCBR.  Richard has just written a new tune, but he’s missing a much needed note on his dulcimer.  Can you put in an extra fret?”  “Hmmm, yes.  How are we going to do this?”  Mimi said, “We’ll come by and pick you up, can you put it in at the radio studio?”  “OK!!!”  Because that’s just what you say to a challenge.  So they swung by, and I de-tuned the strings in the back of the car on the way to the radio station, and when we got there, I did a quickie calculation of where that fret should go, sawed the slot, banged in the 6 1/2th fret making sure it was level and even with it’s neighbors, trimmed it, and handed it off to Richard.  They launched into the tune, and much later…by about 50  years…I found out that I’d been a part of dulcimer history.

UPDATE: Thanks to Douglas Cooke, an archivist of the Boston Broadside folk magazine from the early and mid 1960s, we now know that the radio show was on April 23rd, 1965.  Thanks, Doug!

In about 1988 or so, Mimi invited me to be on a KPFK radio show with her, and she and I told the tale with much chuckling and outright laughter.  That woman could be utterly infectiously hilarious.